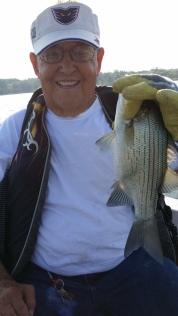 I watched a good movie the other night.  I won’t say which one, because I am going to give away the ending, and I don’t believe in “spoiler alerts!”  The movie was about a father and a son, and their relationship.  At the end of the movie the two were out fishing, and the father finally said some words his son had waited a very long time to hear, and then the father died.  I lost it.  Tears all over the couch.  It was a real mess that even challenged “Bounty”, the quicker picker upper!

The truth is, the last few months my father was alive was difficult.  He was acting out of fear and it hurt.  I saw one of my father’s old friends last week, and he told me my father started fearing me controlling his life before I ever moved back to my home town after retirement to assist him as he wanted and needed.  So by the time I had gotten here, my father had it in his mind how life would go, but it didn’t, and he refused to accept it, because it wasn’t the reality he had built up in his mind.  I’m so glad though, four days before my father passed, we had a nice, peaceful, fun conversation.

Why am I sharing this?  To vindicate myself?  No.  I know in my heart and before God how I treated my father, but the point is, I wanted my father’s last days to be his best days.  I dreamed of my father and I out fishing.  Having a nice day.  Lots of laughs, and because he loved to fish, dad finally catching his trophy fish.  Me, snapping a picture, and dad releasing the fish back into the lake, and then passing on, similar to the movie I mentioned above.  But this ain’t Hollywood, and life doesn’t go like the well scripted, command performance acting, as in the movies.

So when life doesn’t go as scripted, what do we do?  We give it to God, and we do everything to love the other people in the scene as best as we can.  Love endures, remembers no wrong, and writes a great ending because love, always wins. (Love – 1 Cor. 13)

(The title of this post came from the Christian rock group, DeGarmo & Key, from 1980)

2 thoughts on “Stella, This Ain’t Hollywood”

Click on "BOOKS" to learn about my new novel, "Kill The Preacher Man".

I am one of the contributors to, "Abba's Heart". 31 stories of God's love for his children. It's one book in a series from Cross River Media. https://www.crossrivermedia.com/product/abbas-heart/

This is the third book, I have either written or contributed, to get published this year. I wrote a story for Guideposts three years ago. A story of finding comfort from heaven after a loved one had passed away. I wrote about my father.

“God’s Comforting Ways – True Stories & Reflections of Divine Assurance” can be ordered by calling Guideposts customer service and asking for it M-F, 8–6 EST (800) 932-2145